Where do I even begin? I joined the Rama family around the age of sixteen years old. I would say I was a bit shy and timid at the time. I remember how nervous I was on my interview with Jared. I had never really been on a job interview before, and had zero experience working as a camp counselor. A part of me was a bit overwhelmed when we went over the job description and what was expected of a me as a counselor. I couldn’t help but notice throughout the interview Jared had on a smile. All I remember saying to myself was, “Is everybody this friendly?”. I tried to picture myself with a smile on for about eight hours a day for eight weeks and wondered if anyone ever caught a cramp from smiling so much.

I realized this wasn’t an ordinary day camp the day of staff orientation. I felt like I was in a different world, and the atmosphere was completely different from what I was used too. I had never seen so many people so happy to be at camp before. Everyone was so friendly and outgoing that it was starting to scare me a little. You could almost immediately tell who was new to Ramaquois, and I felt like I stood out like a sore thumb. That quickly began to change because I noticed how much time and effort is put into welcoming everyone to Ramaquois. It didn’t matter if you were a new or a returning staff member, everyone was welcomed with such warmth that you could almost feel it as soon as you hit camp grounds.

My first summer turned out to be a great experience. I made many new friends and learned a lot about myself as well. I had such a great time that I told my brother about Ramaquois and told him he had to come. I even brought him to his interview, and remained in the car to wait for him. That was a big mistake on my part. Phil Rainone came out to greet me and asked what was I doing in the car, and sure enough here comes Jared, “it’s like that now?!” lol. Again they made me feel so welcomed and a part of the family even when camp wasn’t in session. It made me feel important, like I was one of their major assets. That’s when I realized that I would always be connected to Ramaquois.

As the summers came and went, I became increasingly comfortable in calling Ramaquois my summer home. I started off on Junior Camp and eventually crossed over to Boys Side. I loved working with the little ones, but I wanted to try something new. That was the summer I met someone who has left a profound mark on my life, Steve Liebman. Steve is such an amazing person. I grew up in a single parent household, and watched my mother work several jobs to provide for my brother and me. I’m thankful to have had strong family support from my uncles, aunts and cousins, but it baffled me how someone like Steve could have an impact on my life so much so quickly. Steve always had faith in me and habitually made me feel like I was capable of doing anything. He was always there for me no matter what the issue and was consistently understanding and reassuring. Steve thought so highly of me, and I’ve never really experienced that from anyone who wasn’t related to me before. It felt good knowing someone like Steve was in my corner. He made me feel good about myself. I looked forward to coming to camp and loved being with the campers. I’ve really learned a lot from him and I am more than grateful to have met him.

Being a staff member of Camp Ramaquois has given me the opportunity to experience the great things that camp has to offer. I never went to camp as a child, but the strong bonds and life long relationships I’ve established here have made up for that. Many of the simple things are what made coming to camp each summer worthwhile. The random chest bumps and exaggerated high fives in the middle of Boys’ Side from Jared Gelb, a surprise bear hug from Scott Kornberg, followed by an “I love You man”, Scott Kaplan singing at the staff party, and how can I forget reenacting Beverly Hills Cop every time Jared sees me, “Hey Phil!!…is that you!?!?!..PHIL!!!”. These moments are priceless and will stick with me.

At times I felt like I was the camper and they were the counselors, and that ultimately reflected in the work I did as a counselor. They modeled the way for us. I helped these campers have memorable summers the same way they have made working at Ramaquois memorable for me.

I’ve had the pleasure of being a counselor at Ramaquois for six amazing summers and I can honestly say there is no place on earth like it! It is unreal how much I’ve changed since I became a part of the Rama-Family. I see things differently, I am not afraid to by myself or show my emotions. I am way more outgoing, developed great communications skills, and I am not afraid to be a leader. Most importantly I have learned the importance of having positive people in your life. I came in expecting to be a regular camp counselor, and the rewards of being a part of this family were way more then what I expected. I am proud to say I was able to wear a smile for eight hours a day, for eight weeks without catching a single cramp!

[Editor’s Note: Phil Duval is an amazing person. In typical Phil fashion, his post makes no mention of the positive impact he had on all of his campers every summer. Phil’s humility and desire to grow as a person and a counselor are just two of his many amazing qualities. During Phil’s six summers at Ramaquois, he was one of our best counselors, and an important member of our community. We miss Phil, but he is now off to bigger and better things!] 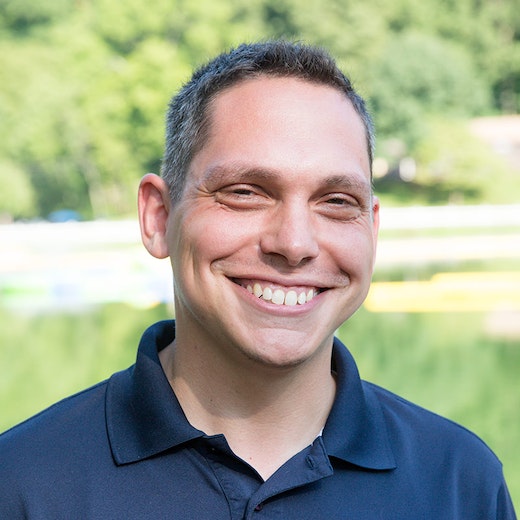 Matt has spent his summers at Camp Ramaquois since 1984 — as a camper, counselor, and in various administrative positions, including his current role of Associate Director. He holds undergraduate and graduate degrees in Operations Research and Industrial Engineering from Cornell University. At camp, Matt works in program development, staff training and camper engagement. He has served as the program chair of the Tri-State Camp Conference and authored a book about summer camp staff training entitled The Summer Camp MBA. Outside of camp, he enjoys hiking, reading, website development, and spending time with his wife, nieces, nephew and dog.

Back to the Blog

We're proud to be considered
one of the best day camps in New York!